Belenios team
Who are we? 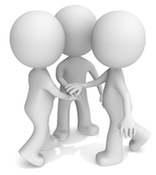 Stéphane Glondu is the main developper of Belenios since its start (2012). He obtained a PhD in Computer Science in 2012 and he is a Debian developer in charge of OCaml-related packages.

Pierrick Gaudry is a specialist of algorithmic number theory and public key cryptography and was involved in various RSA-breaking or discrete logarithm record computations. In 2015, he contributed to the discovery of the Logjam attack on the TLS protocol.

Alicia Filipiak designed the Belenios logo and Vincent Cheval helped a lot with the design of the web site.