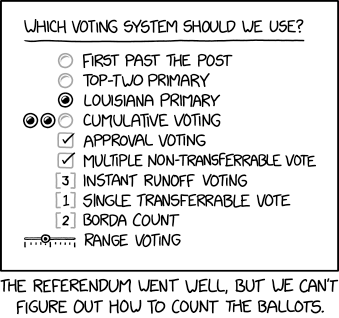 By default, in Belenios, the voter can select some number of candidates among a list, for example, she can select between 3 and 5 candidates among a list of 10 candidates, or vote blank, if blank is allowed. In order to accommodate a larger set of voting methods, Belenios now supports elections where the voters can give an order of preference or a grade to candidates. This mode is still experimental and we provide here some guidelines to understand what is currently offered.

Preparation of the election

On the page "Edit Questions", you need to tick the box in the insert that starts with "Alternative voting methods (warning, still experimental)" to activate this alternative mode.

You need to explain, for example in the field "question", that voters need to provide each voter with a number (1, 2, 3, ...) and explain what it means (for example, you may want that voters give 1 to their preferred candidate, 2 to the second, etc.).

Be careful, any number (between 0 and 255) will be accepted when submitting a vote. It is up to you or the electoral commission to decide when a vote is invalid or not.

During the election, voters give a number to each candidate. Any number is accepted (between 0 and 255).

Let us explain how to understand the raw result on an example. As a result of the election, you will get something like this:

You can see here that you need clear electoral rules, defined before the election, that assess which ballots are invalid and which are not.

Now that you have understood how to read the votes, you can apply any of your favorite methods (e.g. Condorcet, STV, majority judgement) to declare the winner(s) of your election. We do not yet provide support for this but it is planned for the next developments of Belenios.